I like to look at old photographs, not for the subject but for the artifacts in the background. In Belgrade I found my pictures more concerned with reflections from windows and glasses.

In the downtown area we stumbled into a coffee shop in the courtyard between old run down buildings.  It is gaining new life among an artist community with galleries and studios.  We talked with several owners about their work.  One was from Barcelona, Spain developing projects under bARTcelona/Бартcелона.

My view from the coffee shop

Wife’s view from the coffee shop

Down near the river from our place, there was a restaurant that was entered by going up a stairway by a bridge.  Halfway up, there was an entry into what seemed to be an abandoned building.  The offerings were not the traditional plates of meat that are typical of Serbian cuisine.  Up from our place walking toward the city center, the grey buildings crowding the streets.  Their reflection in the modern glass building emphasized these feelings of a drab, cold city, hiding the warmth and friendliness we found there. 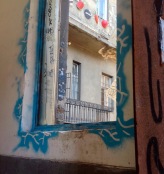 Organic/Macrobiotic Restaurant in a no longer abandoned building

The journey of a single step begins with ideas of a thousand miles.
View all posts by c_in_b →
This entry was posted in Serbia, Travel and tagged Belgrade, gallery, neighborhood, restaurant. Bookmark the permalink.