I have just completed the book, The Museum of Innocence, by the Turkish author and Nobel Prize winner, Orhan Pamuk. This book arrived electronically from the Hennepin County Library. My interest in the narrator is in the descriptions of people and places as he winds his way through our neighborhood in the 1970’s and 80’s. The main character is memorable for his obsessive love of a younger woman and his raki (Turkish brandy) drinking. The only way I can deal with him is by viewing his life as an allegory of Turkish obsession with its national image during political upheavals of that time.

The museum actually exists a short walk from our apartment. The novel contains an admission ticket. 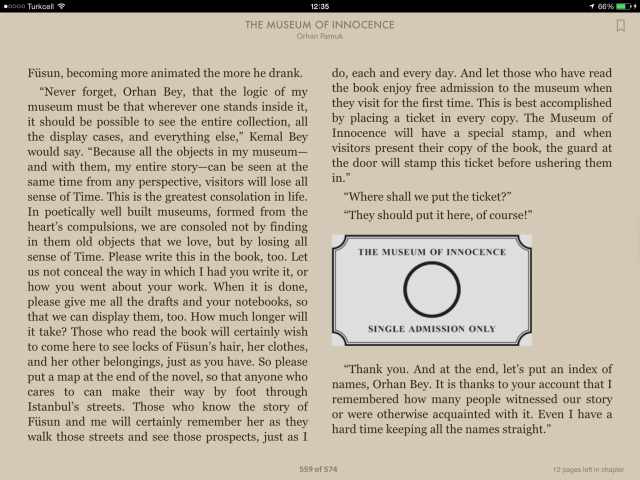 Since I read it digitally, I only have a digital ticket of admission. So my visit is only through electronic means as you see here.

Here’s a tour of The Museum of Innocence

The journey of a single step begins with ideas of a thousand miles.
View all posts by c_in_b →
This entry was posted in technology, Travel, Turkey and tagged Istanbul. Bookmark the permalink.