We left Tunis on a rainy day.  It started with me standing on the main street corner trying to hail a taxi.  One let out riders just across from me.  I zipped over, confirmed he would take me to airport, jumped in, and gave him broken directions in French to our hotel on the back streets where Wife waited under an awning.  At the airport I tried to change back my Tunisian Dinars.  Impossible without a receipt from a bank exchange. My ATM receipt was not accepted.  It’s not the first time ending up with extra cash.  We bought snacks and the international edition of the New York Times (I miss the International Herald Tribune).  The cleaning staff received the remaining dinars.

We flew Emirates Airline arriving in the evening in Dubai.  After a two hour stopover, we boarded our flight to Colombo, Sri Lanka, arriving at 7 am. Many years ago (maybe 1987 or 1988) I visited Colombo, but nothing looks familiar.

We stayed in Colombo for a week visiting some of the historic areas. 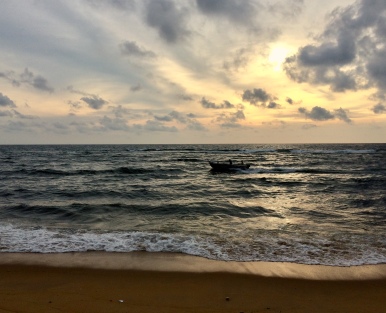 Not clear why this Chinese Gate is here 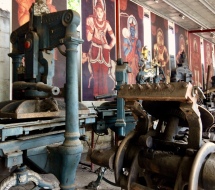 First plate at the Vegan Buffet

An impressive Mosque in the Buddhist country

We left Colombo by train.  We took second class in the intercity express as first was totally booked.  We had reserved seats. Not the same experience as the packed commuter train shown in the banner.

The journey of a single step begins with ideas of a thousand miles.
View all posts by c_in_b →
This entry was posted in memory, Sri Lanka (Ceylon), Travel and tagged colombo. Bookmark the permalink.