This has been the latest theme of my travels as  I continue from South to North (and also East to West along the isthmus) in Central America.  Later, I will provide more descriptions and photos of where and how.  In this post I want to touch a little bit on my philosophy.

In the city of San Salvador, El Salvador I found this monument to Pablo Neruda.

He wrote one of my favorite books in Spanish, Confieso que he vivido (translation: I confess that I have lived, the title in English is Memoirs). His spirit of adventure as he lived in Ceylon (Sri Lanka) and India have been an inspiration.

I am not adventurous though some might wonder considering this headline from May 17th:

In El Salvador, the Murder Capital of the World

Remember, headlines sell advertising.  They generally do not reflect what is really happening at the level of local communities and travelers. Here is a headline from May 20 about my hometown, Tukwila, WA.

I mark my place. In San Salvador,  I was at Kilometer 0 where all distances are measured in El Salvador.  Later, I moved up to Kilometer 84 near the village of Juayúa. 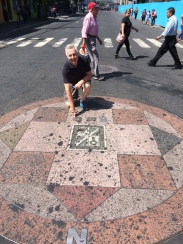 My hope and wish is that wherever you are and whatever you do, in the end you can also confess, “I have lived.”

What do Leibniz, Zwingli, Brahe, Kepler, Kafka, and Neruda have in common?

Note: all the links open to the Wikipedia entries.

In Vienna, I wandered into this square after getting turned around with my directions.

The plaque attributes the establishment of the Austrian Academy of Science to a suggestion made by Gottfried Leibniz in 1713 while residing in Vienna. Among his many accomplishments, he is considered a founder of Calculus along with Isaac Newton.

Apparently, Zwingli, lived near this square when he studied in Vienna in 1498-1502. Later, in Switzerland Zwingli led religious reform.

In Prague, one can follow the life of Franz Kafka, and wander the lesser town neighborhood of the writer Jan Neruda.

I have read a number of Kafka’s books and stories.  It was not until Daughter went to the German-American Institute in St. Paul, MN that I realized he wrote exclusively in German. The Chilean writer, Neftalí Ricardo Reyes Basoalto, derived his pen name from Jan Neruda, whose name he found in a literary magazine. The compilation of Pablo Neruda’s travel writing in Confieso que he vivido (Memoirs) inspired me to travel as much as possible.

They worked together in Prague in 1600. Kepler used Brahe’s observations to identify astronomical principles of the planets.

I have walked the same streets and marveled at the ideas of these luminaries.